I traded for a Tropius, that last Hoenn pokémon I needed to finish the Hoenn pokédex. Well, except to #352, Kecleon, but since that one isn’t in the game yet, I’ll consider my Hoenn pokédex completed for now.

The trade involved me giving a shiny flower-crown Eevee for a Tropius. I was happy to do that since I couldn’t go to Safari Zone Montreal (not that I didn’t try; the tickets sold out almost instantly). And that chances of me going to Africa are slim. I should note that my Tropius is from the Spanish Canary Islands, off the west cost of Africa. 🙂

I’m not a shiny hunter per se, but I do realize their value when it comes to trading. As it turns out, shinies are the actual trade currency. Even then, it’s just the rarer shinies – all the serious shiny hunters have all the community day shinies so those are a no-go for trading. So I am grateful for every shiny I do get, because they may one day become a trading pokémon for something that I can’t normally get.

Gen 4 will be very tough to complete, because it has regional legendary pokémon (Azelf, Uxie, Mesprit). I do have several Azelf so perhaps someday I’ll be able to arrange a trade, who knows.

Anyway, Gen 5 (Unova) recently released so everybody that is still playing is busy capturing the new crop that’s out. My strategy is to use as many pinap berries as possible (they give double candy on a capture, so 6 instead of 3 for a base evolution) since eventually I’ll want to have an extra 25 (base to middle) or extra 100 (middle to final) candies for evolving.

I’m also an avid runner, and Adventure Sync is a really welcome addition to the game. I’ve got my buddy (currently Gabite, since I’m short of candies to evolve a Garchomp) with me when I run, earning 1 candy per 5km. It’s slow going to reach 100 candies, but this certainly helps out… the alternative is spending rare candies (which I will probably do when I near 100, just to finish off quicker). Or just being super lucky either finding gibles in the wild (very rare) or hatching out of eggs for the hatching candy bonus.

This week I ran/walked/moved ~52 km, getting my buddy 10 candies plus a 5km and 10km adventure sync egg reward. My stats say my buddy has been with me for 168.5 km so that’s a total of 33 candies. When I do finally evolve a Garchomp I’ll probably switch to Klink, since that one was only available out of Tier 1 raids and I didn’t do enough of those to get the 125 candies to evolve a Klang and Klinklang. Buddy candy and Adventure Sync to the rescue!

OK I was close to finishing so I carved out some time to just do it.

The Summerset storyline was 9 quests, each multi-step and fairly involved, and I enjoyed it overall. The boss fights were fun and challenging and I’m grateful that failing (dying) only made me retry from a recent checkpoint, not redo the entire fight. 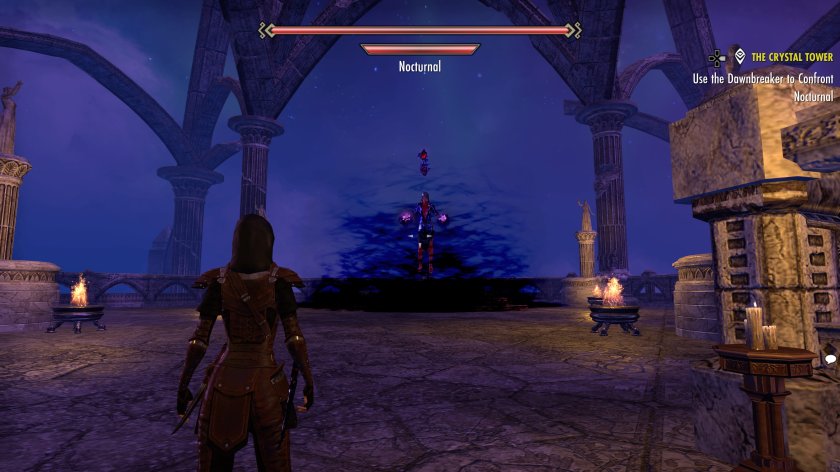 The fight against Nocturnal boiled down to paying attention to the on-screen cues to “use the DawnBreaker”, the sword that you went through great trouble to power up (others gave their lives, etc. hope that isn’t too much of a spoiler).

The screenshot above was the tamest one I could get, because the actual fight was way to hectic for me to pause to get a better one. Nocturnal had a cool. ghostly giant apparition in the background, while directing her champion (the main guy the fight was against) plus random adds here and there.

After my victory I spoke to Sotha Sil to wrap up that chapter. The actual last chapter of the storyline consisted of speaking to a few people and having Razum-Dar call forth various citizens of Summerset that you helped out. That was a nice conclusion!

As for Daurum… I want to find the 3 other wayshrines in Summerset I don’t yet have. Hey, those will come in handy should I want to zip around the island in the future!

After that, I plan to go start the original main quest and defer Morrowind until I’m done.

My goal was to finish the storyline on Summerset, and make my way to Elsweyr. I figure I’m already “out of order” from the main storyline and Morrowind, might as well not worry about it and see new areas, and then go back to the mainland and Morrowind later.

But, I wasn’t able to do it. I wrapped up A Necessary Alliance and am now at The Crystal Tower, which is 8 of 9. The end is in sight!

Wrapping up the previous step involved a tough fight: defend two portals (one at a time) and basically kill the final mini-boss that attacks. Like most quests in ESO, there are a series of regular enemies to fight as you navigate towards various goals, then the quest wraps up much tougher fight. It generally takes me a few attempts at these “quest completion” fights, buffing up a little by eating some food beforehand, popping a healing potion as needed, etc.

This particular fight was annoying due to the ~minute long run I had to do after dying to get back into the fight. But, after a few attempts I prevailed. It kinda felt like Dark Souls, scaled down of course: get to the problematic mini-boss fight, hang at a distance to learn their moves and what patterns to dodge (various red circles). I’m glad I trained bow as a secondary weapon because it lets me do some damage while kiting for my life.

You have two allies in the fight, one at each portal: Razum-dar and Darien Gautier, both characters in the storyline. Both are decent fighters, but won’t finish the mini-boss off for you. What Darien does do is occasionally is yell “get behind my shield” before popping some bright light damage absorption bubble. I also learned to stand right behind him when he does that and keep attacking.

Anyway, later I talked to a Daedric Prince, Clavicus Vile. He at least recognizes how awesome I am at previously thwarting his plans. 😉

I finished up Vol 1 Book 2 on Barlk and am now headed to Evendim in the North Downs for Book 3. I like the Lone-Lands, but since it is essentially the first zone outside the starter zones, I’ve also spent a LOT of time questing there.

I feel like I’m leveling like a rocket blasting off. Compared to the Legendary Servers this is fast, because there isn’t a xp penalty. I traded my Derudh’s Stone pocket item (+25% xp on monster/crafting) for another pocket item (stat and evade bonuses) from the skirmish camp. I figured I can pass up the +25% on monster kills, and I’m only doing the bare minimum mining/smelting to keep current with available metals in the zone.

What also helps is all the xp scrolls I’ve saved up from hobbit gifts… yeah I’m keeping those going until I run out of them. Oh yeah, I’m also spending my accumulated destiny points to extend the amount of “blue bar” enhanced xp I’ll receive.

Don’t get me wrong, I love the original Shadows of Angmar and Mines of Moria content… it’s just I’ve seen it so many times I’d like to get this Beorning through it and to Mirkwood and beyond! 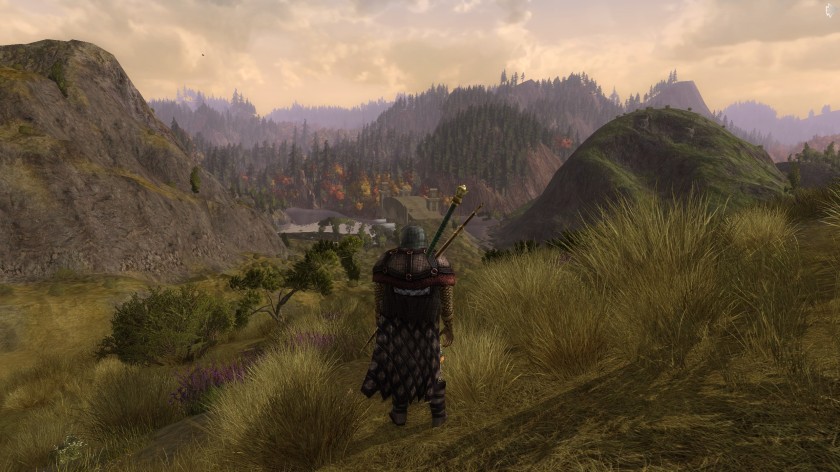 Looking east towards the Trollshaws… I’ll be heading there for Book 4.

Before finishing up Book 2 I took stock of my virtues. I had expected a few to level naturally, but I looked and all were at 0. What?!

It seems the virtue system was revamped – yet another change I missed – and now, instead of doing specific deeds to raise virtues, any/all deeds give experience that goes to the virtue you are “earning” experience towards. All you do is click the virtue to set it “earning” and then do deeds.

This is fantastic! Originally if you wanted to increase a specific virtue, you looked through the list and had to travel to specific zones to do specific tasks (quest, explore, kill X number of specific mobs, etc.) I didn’t mind the questing and exploring, that’s the point of the game, but the kill deeds were annoying. Especially later when it was stuff like “kill 200 worms in the Trollshaws”. For example.

Anyway, after seeing this I took a break to finish up various quest and exploration deeds in Bree and the Lone-Lands, thus bumping my various virtues to between 4 and 8.

I also revamped my build, doing with the yellow line (The Roar). The red line (The Claw) did lots of damage but didn’t have much in the way of healing when in bear form, which made it feel fragile.

I decided to try out the Roar which is much, much better. I get Encouraging Roar which is an immediate heal plus a HoT, on a low cooldown. This skill works in bear form, I think the tooltip in the wiki is old. Later I’ll get more buffs and utility skills making this trait line quite nice.

Maybe later I’ll try out the tanking line (The Hide) but I’m in no rush. 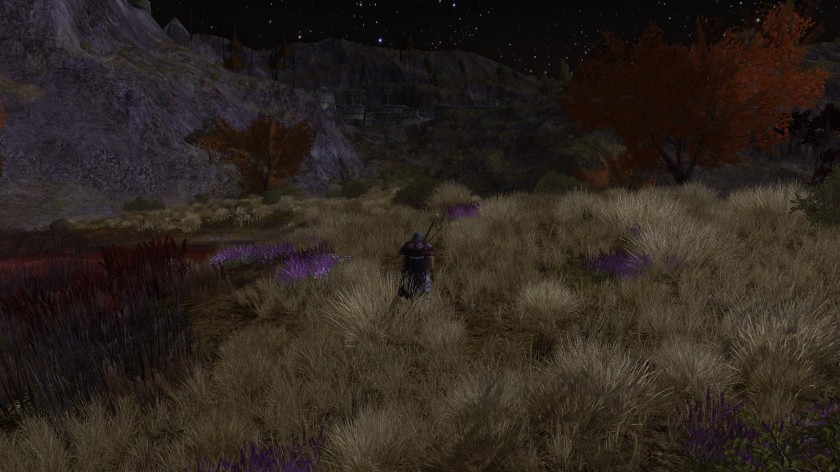