I’ve noticed my gaming tastes changing over the months/years. Currently my MMO playing is ebbing while other games are not.

I still do play though. I’m taking a break from SWL because I was stuck on a ridiculous blocking storyline quest and can’t advance without passing it. Whoever thought that was a good idea is… well they’re just wrong.

I log into LoTRO a few times a week to grab daily rewards and quest a bit. But that makes for glacial progress and thus Spessartina, my hobbit minstrel, is still in the Rivendell/Trollshaws regions and a few levels away from starting the next storyline quest. Scarlatina, my hobbit warden, is likewise still in the Lone Lands. That’s fine though, I always do enjoy coming back to LoTRO and playing a bit.

In ESO, I decided to start a new char after migrating to the PS4. In order to play something different, I picked stamina nightblade. Since Redguards get racial stamina bonuses, I went with that. I’m not too far along, having completed the Morrowind tutorial and then immediately sailing back to Stros M’Kai in order to work through the original storyline. I’d rather play in the order the game released in!

What I have been doing more of is playing single player open-world adventure-style console games, like Rise of the Tomb Raider. I take advantage of Redbox and rent some games too (Monster Hunter World, God of War) with an eye towards checking a game out before buying it. I really like God of War but I can also wait for a sale since I have a backlog. 🙂

I hit level 15 in Ingress, almost 2 years after I started to play. It’s still fun and easy to work into playing bits and pieces as time permits.

Recently I was in Hawaii on a family vacation, and had an afternoon or two to myself. So I got some exercise and walked around doing some banners/mosaics. Again, missions involve visiting various points of interest and doing something (typically hacking the portal). A series of missions that together form a picture is called a banner or mosaic. And I like doing those. Here’s the 3 I did: 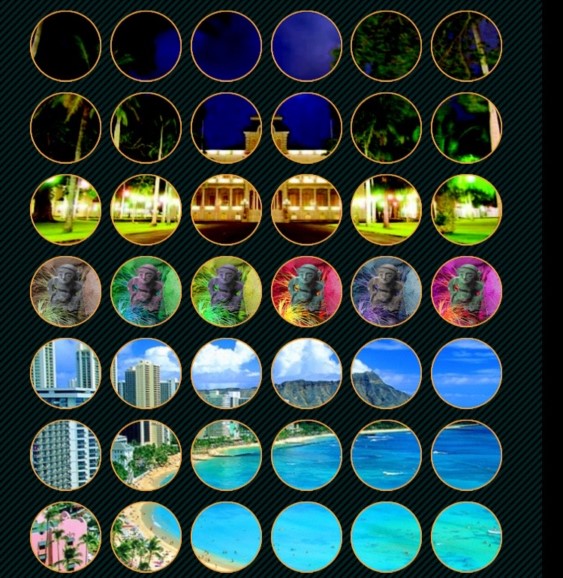 Top 3 rows are “Iolani Palace”, middle row is “Legend of the Menehune”, bottow rows are “Aloha, Waikiki”. Not a bad way to enjoy a walk around town!

I’ve also been playing a lot of Pokémon Go. Yes, there isn’t a whole lot going on in the game… or is there?

The fundamentals of “collecting all the pokémon” is still the driving force, but Niantic has been slowly adding more and more things to do in the game.

There is a rudimentary quest system, which currently leads to finding legendary pokémon (so far: Zapdos, Moltres).

You can have a buddy pokémon that gains candy when you walk certain distances, as well as hatch eggs, so when I walk or run with my phone I leave it on with pokémon running. Every candy helps!

They revamped the gym battling system to encourage more turnover, and as a result I’ve been working on getting gold on gyms I live near (when you attack or defend a gym you gain points on it, and rank up bronze to silver to gold. Each higher tier yields more stuff when you spin the disc, you also get more stuff when the gym is your team) since that results in the most efficient farming. 😉 I have 13 gold gyms and am close to #14 and #15.

A recent addition are community days where one pokémon spawns in abundance for a 3 hour period. I missed the first few, but have participated in last month’s (Mareep) and yesterday’s (Charmander). I met up with 3 friends and we walked around Rockville town center, seeing dozens and dozens of other players, catching every charmander in sight and evolving Charizards with a special event-only move (Blast Burn). We joined in raids for the Legendary Ho-Oh and I am happy to say I got one: 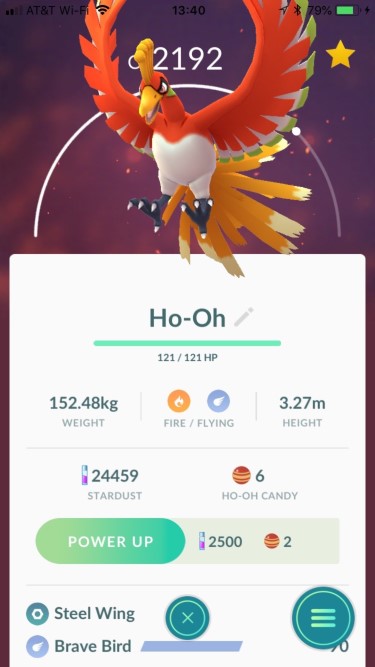 A bunch of players gathered for a raid as the event was winding down, but it turned out to be a Latias. Luckily I got that one too: 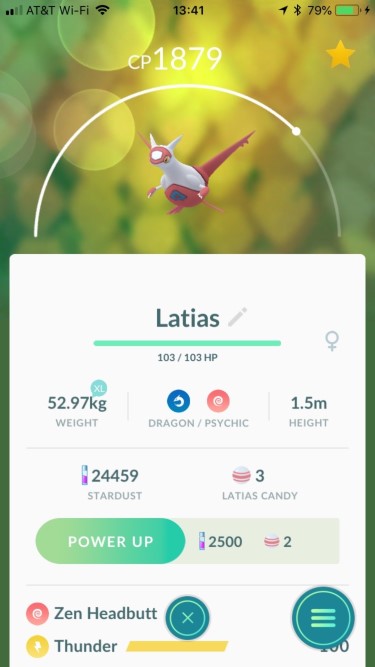 The thing about Legendary raids is with enough people, you will defeat the boss.  All your pokémon may faint and you might have to re-enter, but enough people will do it unless they are horribly underleveled (using low combat power pokémon). The hard part is catching it afterwards. Each player that participates get a number of white premiere pokeballs to use, that are only available from winning legendary raids and they don’t carry over, but there are bonuses for the team that does the most damage, for defeating the boss, your badge level at the gym, team that controls the gym. So when teams form, usually Valor (red), Mystic (blue), Instinct (yellow) will try to form their own group – not being exclusionary per se, anybody on any team can still hop in, it’s just more beneficial to you if you are raiding with others of your own team since you really want those extra premiere balls. That’s because legendary pokémon are ninja dodgers, and they are also very good at breaking out. So more premiere balls is better.

Over time I’ve switched to a curve-ball style throw (wind up in a circle before a throw until you get sparklies, then throw at an angle and the ball will curve left or right depending on whether you wound up clockwise or counter-clockwise). I don’t know the specific numbers but especially for a legendary Pokémon you want to use your best berries (golden razz berry) with a curve ball throw and ideally get a nice/great/excellent hit (how well you hit the circle target)… and even then there is a large chance the legendary will break out. I had 2 Latios (the blue clones of Latias) escape after raids because they I missed or they dodge half of the time, and broke out of all hits – as I recall it was roughly 25 chances over 2 raids and nothing. Argh! To a degree its a random chance you can attempt to raise, so all you can do is have the opportunity to catch one, which is what happened yesterday and I am thankful. 🙂

For the Latias raid, I counted 35 players. Yes, almost 3 dozen people across all age groups and genders, standing on a street corner split into multiple raid groups, all wanting their chance to catch a Latias. It was awesome in many respects!

One thing I haven’t really gotten into is analyzing pokémon stats any deeper than the builtin appraisal system. But the serious players are all about pokémon IVs (individual values; the stamina, attack, defense stats) and move sets (fast and charged; attack and defense). There is of course a massive amount of stats info google will turn up, and it is kind of mind boggling since IVs can’t be changed and move sets are randomly assigned (however there are in-game items called Technical Machines that can change fast or charged attacks). There are also apps that help analyze these things so as a first step, I bought PokeGenie and started analyzing all my high CP wonder pokémon. I may change up what pokémon I keep, what ones I evolve and power up based on the next level of stat analysis. 😉

By and large I’m mostly a “collector” player, just trying to fill out my pokedex. I swap buddies to get candy for evolving, fight gyms here and there to make them Mystic (my team), leave pokémon to defend gyms for badge levels and coins, and so. It isn’t the most sophisticated game ever, but for a low key mobile phone game, I’m finding it social and fun.