If anybody is still reading due to my lengthy break, I promised something about guardians.

The Ingress guardian badge comes from “controlling” a portal for consecutive days, which means owning it. Given offense is very strong and defense is much harder (a determined player with ample gear will destroy a portal they decide to attack) this comes down to flying-under-the-radar as best you can.

Of the various badges you can earn playing Ingress, Guardian is unique in that… other players can keep you from getting it. Every other badge you can chip away at, but another player, friend or foe, can stop your progress on Guardian by destroying the portal (in the case of a foe) or flipping it via Jarvis or Ada Refactor (in the case of a friend).

There is a bit of psychological aspect to it – how to own a portal but not make it obvious it is a Guardian candidate? Trying to get Guardian on an exposed portal in a frequented location will not work, but how far off the beaten track do you go? Adding the best shields you can is another signal that the portal is important and may in turn attract more attention. Meanwhile the slightly-more-effort to reach portal, say in a park that requires some walking/hiking, deployed like a normal portal, is probably your best bet.

One downside in the game is cheating via comms scraping. Both sides do it I’m sure, so if you are up against a determined enemy team that is possibly comms scraping, then the best things to do are a) seed a guardian candidate frequently, say one or two a week, and b) go out of your typical play area.

The game doesn’t track which portal is your current guardian, only how many days your highest guardian reached. For me, consulting a calendar helped to jog my memory about which portal was likely to be currently guardian. But there are many players who don’t have any idea what portal their guardian is since it easy to lose track when say 4 months go by. You just know it is still alive if you see the guardian achievement increment daily.

What is also common is a break in advancement – say you capture a portal and then 5 days later capture another one. Fast forward several weeks and say the first one is currently ticking up, but then it is destroyed. The guardian badge will pause since until your next oldest guardian ticks up and starts advancing, at which point that is your new guardian. In our example, perhaps 5 days after the first portal is destroyed, guardian will start ticking again because of the 2nd portal takes over.

I was the target of comms scraping, so I believe, because I had a series of guardian candidates get attacked under suspicious circumstances. That may or may not have had anything to do with me depriving the enemy of a farm. I live near an area with 10 portals in close proximity that they upgrade and modded for hacking. Except I started to visit daily and blow it up. The first rule in war is to deprive the enemy of weapons!! This area is 10 mins off my commute to it was easy for me to drop by and claim it; meanwhile it takes 8 of their players to stop by and make it a level 8 farm. I win that asymmetric situation, on behalf of my team, hehe.

Anyway, one attack involved an enemy player essentially picking one portal out of a dozen nearby, making a bee-line straight to it and destroying it, leaving all the others untouched. Hm… Yes there are other explanations but the most likely is my portal reached the top of some watch list and the call went out to destroy it.

The same thing happened when another guardian reach day 148, 2 days short of the ultimate badge of 150 days. Said person drove straight to it, blew it up, then attacked a handful on the way out so as to not be too obvious.

Another guardian bit the dust when a player drove about 80 miles one way to flip a portal I had in another state! And then drive back without attacking anything else. Can it be any more obvious? There is no defense against a flip – while defending is difficult, with enough people it is possible to recharge a portal through an attack. But flipping (using a Jarvis or Ada Refactor) is instant and always works.

At this point I was a bit discouraged BUT I was also looking forward to another batch of guardians I had on the horizon. See, I’m an avid trail runner and hiker, and every day that ticked by drew me closer to literally dozens of portals I grabbed on various trail systems. Typically I would visit a park, capture every portal in it, then do that again two weeks later somewhere else. I was actually a bit curious to see who or how many people would be dispatched to cover 5, 10, 20+ miles in various locations, week after week.

At one point I had around 40 portals going as guardian candidates. Half on hiking trails, several in little towns but away from the center. It takes a lot of XM to recharge that many, so I started to deploy a one or two resonators on each, making it easier to recharge that many. This also makes it impossible to link to/from a portal, which helps with “camouflage”. Not really of course, the portal is still visible on the map, but at certain zoom levels only links show up, and of course if it can be linked then it can be a corner of a field which is very visible!

It didn’t come to that because I unexpectedly earned Guardian on a not-too-remote portal in a park I live near, haha! That’s the irony of it; one week after someone drove 80 mi one-way to flip my best candidate, a humble portal in a nearby park delivered for me.

So basically, to get Guardian, set up a portal or two every week – especially grab a few portals that require leaving the car and walking some distance, and travel out of your typical play area to do it.

Anyway, now that I have the onyx guardian badge, nobody seems too interested in attacking my portals any more. Probably not the same thrill denying an enemy player that badge when they have it and the badge can’t be taken away.

Here’s a portal in a nearby park that is a good 1.5 mi hike roundtrip from a parking lot. Not impossible to get to, however it does discourage the “car-gressers” that don’t like to leave their vehicles. I run by it every other week and take the chance to hack it for keys. Since I can get to it fairly often I’m using it as an anchor for various fields I throw, knowing that it is real annoying for enemy players to attack. 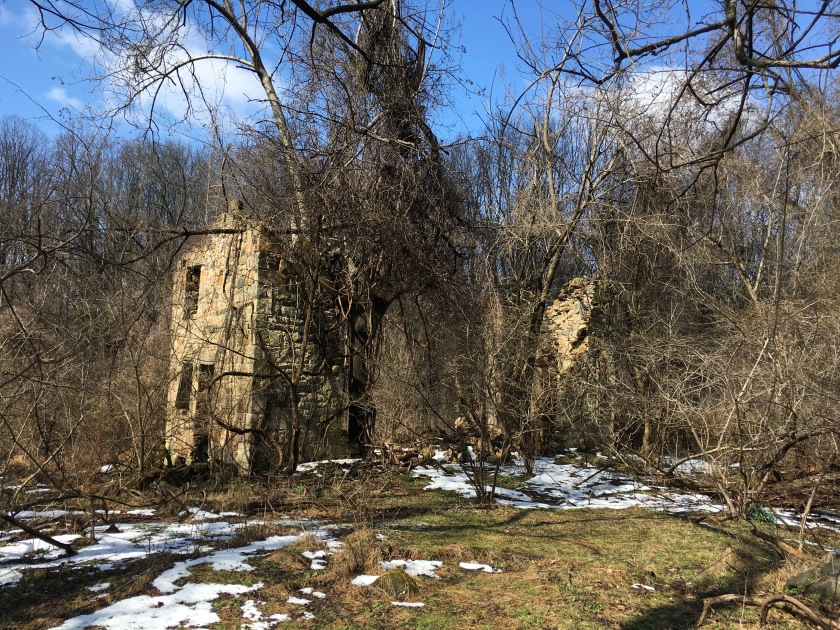 I’m hoping somewhere they draw straws to see who has to hike in for it. And then I retake it a day or two later, ideally demoralizing them on how fast and consistently it comes right back to me.

So I haven’t been playing traditional MMOs much lately. Part of that, as I mentioned before, is that I’m getting a lot of the satisfaction I had playing MMOs here in Ingress. It isn’t the same of course, but close enough for me especially given the advantage that Ingress has simply being portable. If I have a few minutes to kill somewhere random, I can often play Ingress for those few minutes. Whereas an MMO takes up a multi-hour block of time to do anything, at home on my gaming PC.

And that’s another reason I haven’t played MMOs much recently – my evenings have evaporated. I used to be able to block off 3 hours once or twice during the week, and then usually the same on the weekends. But now I’ve picked up more hobbies and friends and it’s tough to say no in order to pursue a fundamentally solo hobby.

That being said, I have dabbled back in a few times. I returned to WildStar for my free level 50 character, I log into LoTRO every other week to fiddle around, grab the daily reward in Guild Wars 2 a few times a week (yeah, not every day), reinstalled FF14 since it is free up to level 30 (or is it 35?). I let my sub to EVE lapse since I wasn’t do anything besides manipulate my skill queue. I log into ESO and TSW and meander a bit. None if this was concentrated play time and I’m not really getting anywhere in any game.

I’m concerned about the upcoming changes to TSW… I only got as far as the Scorched Desert but think that TSW is a fantastic game overall. I have my fingers crossed that the relaunch will go well. When I think of awesome quests I’ve done in MMOs, several from TSW and LoTRO come to mind, and as a credit to TSW, I really only saw the quests in the starter zones (Kingsmouth, Solomon Island, Blue Mountains) plus maybe half in Scorched Desert.

So every time I log in/out I remember how much fun I’ve had and wonder how I can carve out the time again. Perhaps I’ll be more like MMO One Night A Week going forward.

Right now I need games that I can pick up and drop on short notice: portable games especially, such as handheld games like Fire Emblems or Ettrian Odysseys. I mention those since I have a New 3DS and various games in those series, they are fun and there isn’t much overhead in just playing for ~30 mins.

My goals are to get back to LoTRO and continue the storyline. I checked and I’m 3 books behind in the Epic Quests! To start Vol 4 Book 5 I just need to talk to Gandalf who is waiting for me at at the Seventh Tier of Minas Tirith. 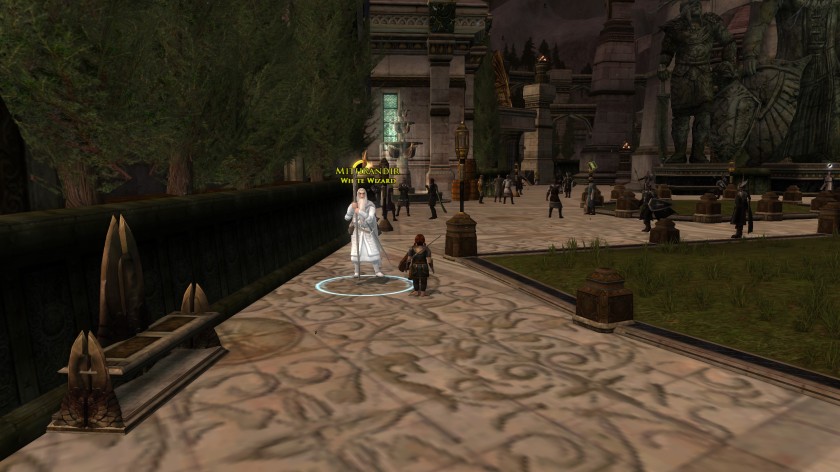 The only other MMO that fits my current schedule is Guild Wars 2. I have 3 characters (ranger, guardian, revenant) at the same place in the storyline so I need to move forward. GW2 is great for time-squeezed folks like me – fast travel everywhere (once a char has discovered a waypoint) and simplified inventory management between chars due to convenient bank access, crafting material storage, and the shared inventory slot.

Also, when The Secret World relaunches I will definitely give it a spin.

Hm… looks like WildStar, FF14, and even ESO are going to be sidelined for a bit. They are great games but I need to pare my game rotation down and find some sustainable level of play.