The other MMO I play these days is ESO. I’ve devoted far less time into it that LoTRO or even WoW which I want to change.

First, ESO has a lot of the quality of life enhancements I missed from WoW Classic. Free mount, actual fast travel, not needing to grind to money just to get the basics in the game like skills or minor (vendor) gear upgrades…

Funny thing about that – I was dirt poor in ESO for months until I was able to grab one of those 100,000 gold daily rewards. I mentioned it during Blaugfest when I grabbed my first 100K gold… and the fantastic news is that it happened again recently! Yes, that’s right, I (and presumably other players that also logged in enough during the time) collected another 100K gold and I no longer have to worry about paying for the basics anymore. I can buy gear upgrades from vendors, I can deconstruct everything for research without having to pinch pennies and sell it all, I can train my horse every day. Heck, I can train a horse on two characters!

Which is what I’m doing. My Woodelf Stamina Nightblade has almost maxed out her horse, while my new Argonian Magicka Warden is at the beginning of many weeks of horse training.

What drew me back, besides ennui in WoW, was the free ESO trial in late Jan. There are nice benefits but the main one is the infinite crafting bag. So, I did the trial just to clear out my characters and bank of crafting stuff and put it into the bag.

And it’s pretty nice… what I didn’t realize is the crafting bag is shared across all characters. That’s a huge advantage ESO has over WoW, where there is no shared storage and moving stuff between characters involves a miserable one hour delay on in-game mail. Without the sub and crafting bag, ESO at least has shared bank space and instant transfers.

I liked it so much, I re-installed ESO on my PC and did the trial there as well. I’m mostly playing ESO on my PS4 but I figured might as well plan for every contingency. 😉

My Nightblade is level 20 and done with the Summerset storyline quest, but before leaving the island and pursuing the original main quest, I have a few minor explorations to do (mostly find a few other wayshrines). My Warden headed straight out of the Elsweyr tutorial to Davon’s Watch (after doing Abode of Ignominy, the first delve) and found the hooded figure, starting the original main quest.

I have fun with my Nightblade but I want a character that would be a good healer, as in, has a healing skill line – yes I know everybody can wield a Restoration staff but my Nightblade is a stamina char for one, and I don’t want to split my skill points around just yet. Although there is only one conflicting skill morph between Umbral Assassin (the build I’m following for my Nightblade) and Blood Magus (the Nightblade healing build). 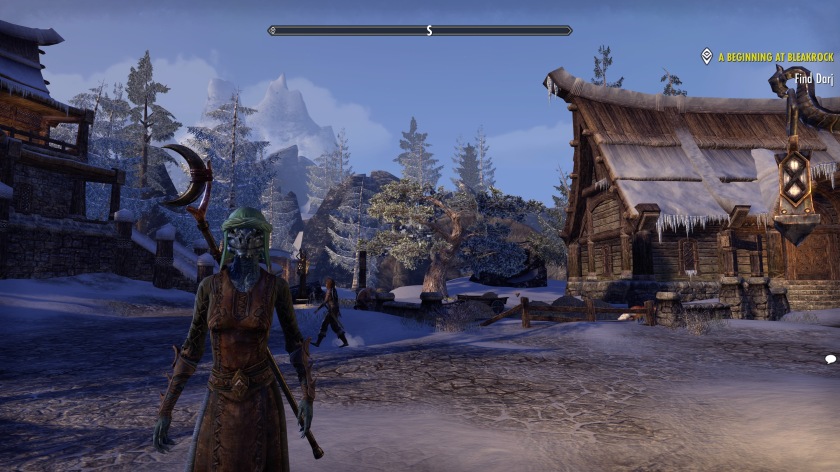 So between Templar and Warden I decided to give the Warden a go, making an Argonian because they look cool. And, get healing skill bonuses. I’m following the Warden Initiate build, and note there are no conflicting skill morphs with Master Herbalist, the healing build. Perhaps I’ll branch off to that build later. In the meantime I’ll grab a restoration staff and throw in the occasional skill point into my restoration skill line and Green Balance skill line (warden-only healing skill line).

I really like the skill system in ESO. Armor and weapons are freely usable by all classes, every class has 5 builds (2 magicka builds, 1 stamina build, 1 healing build, 1 tank build), guilds and races have skill trees – it’s fantastic. Combat does seem a bit off compared to tab-target GCD MMO combat I’m used to, but I can adapt a bit.  Graphics are incredible, it is certainly state of the art in that department.

MMOs offer all the killing you want, and usually crafting as a side activity, but ESO also added in thief/stealth content in the Thieves Guild DLC, along with supporting game systems and a skill line. So they are already trying to innovate in the somewhat stale or more charitably described “well explored” MMO space.

I’m considering subscribing to ESO, for the crafting bag, crowns, and XP buffs. DLC access is nice too but I’m years behind in expansion storyline and zone questing already. 😉 I just figure after my WoW sub expires I might throw in to ESO for a few months.

I have yet to meet up with my friend that plays on Arkenstone, we apparently have almost perfectly offset schedules, but that’s fine – I decided to make the best of it and join some “alts” to a kinship that is looking to level up and do the SoA content.

I put “alts” in quotes because I have no other higher level chars on Arkenstone (other than the level boosts I used) and I’ll probably wind up playing these lower level chars more.

I decided to start a Lore-master and also a Rune-keeper. I have the least experience playing RK and Captain, so I thought I’d try one of those classes. As for the LM, I wanted to try one again. The LM was one of my original main characters on Landroval, until I accidentally deconstructed their legendary weapon, mistaking its overall level. OOPS! Rather than searching for another one, making do with the much lower level one I was left with, I decided to play my guardian for a bit until the sting of my mistake wore off. And the guardian took over and I never switched back.

My original main char on Landroval was a hunter, which was fun (I find all the classes to be fun) but I want to have more flexibility that only being DPS. So I’m unlikely to seriously play a hunter or champion, leaving me with only 8 other classes to choose from which is plenty!

Playing LoTRO makes me so happy – I love the music and setting, storyline, classes and heck, even the quests although most quests are old school kill or escort quests. But many are humorous or tell a small story or have great writing. 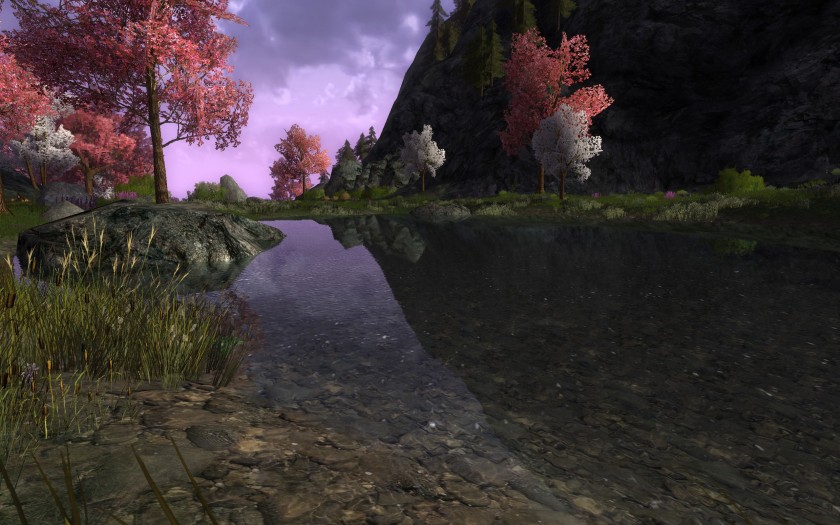 Other games may look better but I think LoTRO does just fine in the graphics department.

My character feels powerful. I know over the years the devs have tweaked damage and experience gain, but at level 31 my Lore-master hasn’t had a defeat and quests plenty fast (compared to my priest in WoW!). I’m expecting that to change but even twice as long killing enemies will be faster than I remember back on the original SoA days.

Another major draw is the quality of life additions LoTRO has that WoW Classic doesn’t. Fast travel in LoTRO is actual fast travel – horse rides a few seconds, loading screen, you appear at the destination. Flying in WoW Classic can still take 20+ minutes to reach your destination. This was an issue I had trying to quest in Un’goro Crater from being based in IronForge – it was a flight, ship ride, flight to Gadgetzan, then another 5-10 mins on the mount, just to get to where the mobs were. Ugh! 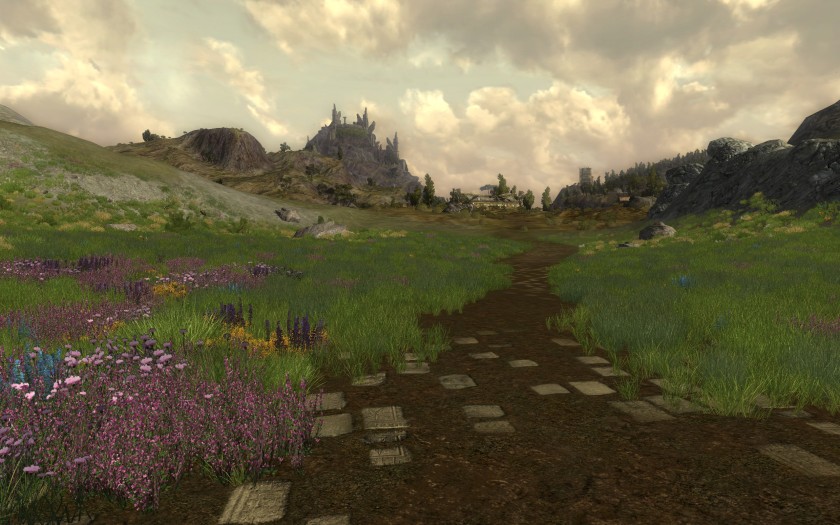 LoTRO allows multiple milestones (analogous to having multiple hearthstones in WoW) and traits to lower the cooldown all the way to 5 mins. These are store items, but I’m VIP with coins to spend on decreasing downtime so I can spend more time playing the game.

LoTRO has in-game mail that actually delivers immediately (one hour in WoW Classic), shared storage (not in WoW Classic), you get one large bag from the start, and between not charging for skills (original LoTRO did charge characters to learn their skills but that went away possibly a decade ago at this point), quest rewards, and daily login rewards, I have plenty of money to buy a mount, repair gear, and purchase supplies for crafting… without specifically farming gold.

I just play and it’s great.

To help starting off on a new server, I bought some coins in the store. I don’t mind throwing in some money in lieu of a sub. I bought my characters extra milestone skills, milestone cooldown skills, and a stack of 5 experience scrolls, the +100% variety.

I joined a kinship that wants to run the content on-level, with the current goal of the level 50 instances in Angmar (Urugarth, Carn Dûm, Barad Gúlaran) – so my goal is to get my LM to the high 40’s ASAP. To that end, if I’m questing for an hour, I’ll pop an experience scroll. After than runs out is when I do other tasks such as distributing items between chars, riding out to grab a horse point for the first time, a class quest, or minimal crafting so I can harvest at the next higher tier. Once we have enough players to run the instances, I suppose we’ll all play an elaborate game of character-leap-frogging to level up to the next group of instances.