My goal was to finish the storyline on Summerset, and make my way to Elsweyr. I figure I’m already “out of order” from the main storyline and Morrowind, might as well not worry about it and see new areas, and then go back to the mainland and Morrowind later.

But, I wasn’t able to do it. I wrapped up A Necessary Alliance and am now at The Crystal Tower, which is 8 of 9. The end is in sight!

Wrapping up the previous step involved a tough fight: defend two portals (one at a time) and basically kill the final mini-boss that attacks. Like most quests in ESO, there are a series of regular enemies to fight as you navigate towards various goals, then the quest wraps up much tougher fight. It generally takes me a few attempts at these “quest completion” fights, buffing up a little by eating some food beforehand, popping a healing potion as needed, etc.

This particular fight was annoying due to the ~minute long run I had to do after dying to get back into the fight. But, after a few attempts I prevailed. It kinda felt like Dark Souls, scaled down of course: get to the problematic mini-boss fight, hang at a distance to learn their moves and what patterns to dodge (various red circles). I’m glad I trained bow as a secondary weapon because it lets me do some damage while kiting for my life.

You have two allies in the fight, one at each portal: Razum-dar and Darien Gautier, both characters in the storyline. Both are decent fighters, but won’t finish the mini-boss off for you. What Darien does do is occasionally is yell “get behind my shield” before popping some bright light damage absorption bubble. I also learned to stand right behind him when he does that and keep attacking. 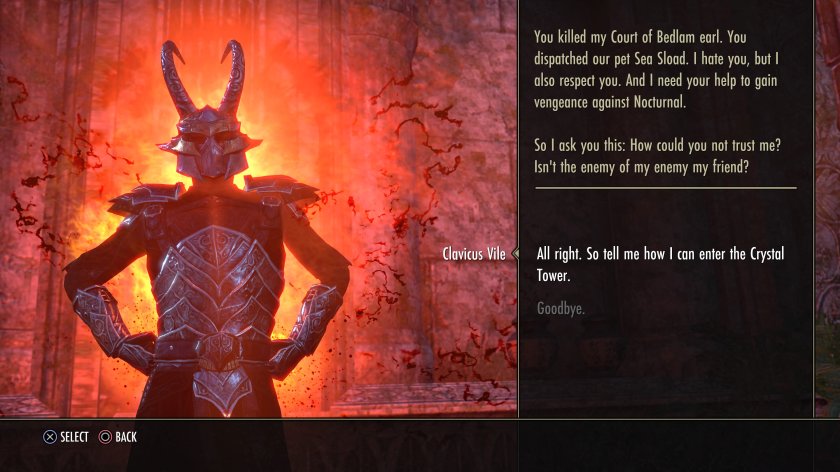 Anyway, later I talked to a Daedric Prince, Clavicus Vile. He at least recognizes how awesome I am at previously thwarting his plans. 😉