One thing I’ve missed about Landroval is catching an impromptu concert outside the Prancing Pony. I join and watch (and dance, clap, roar, etc.) for a few minutes every time one is there because it’s fun for me. I think about how this is an example of players making content for other players. Well, maybe not content so much as entertainment. In an MMO world where you advance by essentially killing everything in sight, a non-combat musical break is welcome.

I inspected the bands waiting on the side and it appears the standard for musicians is to all pick the same race and class, wear identical outfits (except for possible the leader), and for the ones I looked at, get to the same level. Pretty cool!

I was in my Beorning bear form trying to be inconspicuous on the rock. 😉 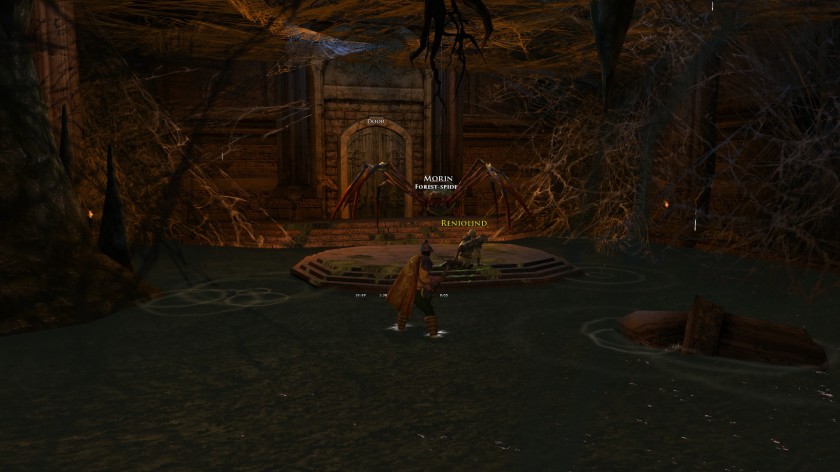 Anyway, starting a new character is speeding right along. With no xp penalty on the Legendary Server, xp boosts from scrolls saved through the months from hobbit presents, enhanced xp from spending destiny, and the Derudh’s Stone pocket item, I reached level 15 in just over 3 hours. And this wasn’t with hardcore power leveling, I just followed the quests from the Intro (Beorning intro is very short), Prologue, and then up to Vol 1 Book 1 Chapter 5. I stopped at Adso’s camp on the way to see Lenglinn in order to do my level 15 class quest.

I usually start a character in the Shire – well, I usually play hobbits so that is the natural starting point! – and do 75 quests there for the +2 Innocence virtue. It’s a nice virtue to have since it provides physical mitigation and that’s useful for every character. I’ll swing my the Shire eventually and chip away and those quests. For now I’m going to work on knocking out Book 1 and Book 2 (occurs in the Lone-Lands) as soon as I can.