There’s a lot I like about GW2. Fast travel, a little bit of action combat, an overall design that emphasizes streamlined activity.

The main issue I have with GW2 isn’t intentional on the part of ArenaNet – it is that I really loved Guild Wars and thus miss what isn’t present. I miss double classing, hunting elites for elite skills, heroes and henchmen, zoned explorable areas, and alliance battles (the only PvP I really enjoyed. These were 12-v-12 matches, you could bring in PvP-only characters so each team should be evenly matched level and gear wise. Unlike WoW’s battlegrounds which were partitioned every 10 levels so there were wild mismatches).

It isn’t a bad game by any means!

In fact, I think Guild Wars 2 occupies a rare space in the gaming world: one where quality-of-life features are front and center. This was also true in Guild Wars (yes, yes, I’ll stop mentioning Guild Wars). Respecing in GW2 is free and easy. Travel to a location, at least to a nearby waypoint you’ve previously visited, is cheap. Crafting speeds up as you craft a stack of items (take that, LoTRO!). Need to transfer items between characters? GW2 offers special bag inventory slots for exactly that. Many items are bound-to-account so they can be used by everyone. The daily rewards feature laurels and experience tomes, useful for equipping and leveling alts. Birthday rewards feature instant level-20 to level-60 scrolls. With those, if you are at all a serious player you should have all character slots at level 80, it’s very doable. 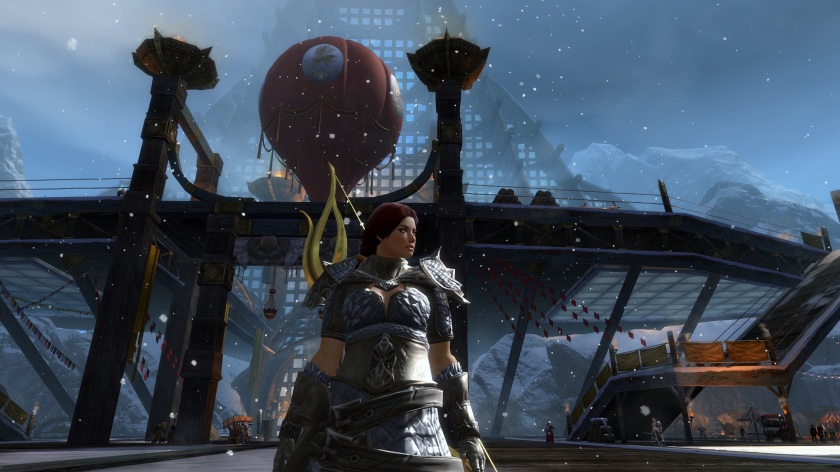 As for my progress, I’ve tried every class and gravitated back to the ranger, which I knew I would (my GW main was a ranger too). I made characters with various races/profession combinations back when I started, and paired ranger with Norn. Now I wish I had chosen Asura. That’s because I love small/short/tiny characters in MMOs, since physics doesn’t matter. Nothing quite like a tiny character taking on a gigantic monster… I love the mismatch in size with the tiny player character emerging victorious.

If ArenaNet ever sold a race change scroll, I’d do it. Who knows, it might happen. Standing Stone Games said they were bringing that capability to LoTRO, so it could happen here.

Anyway, I completed the original storyline, participated in Living World Season 1 (not playable anymore) and started Season 2… but bogged down there because there was a surprising amount of jumping involved and that isn’t my thing in an MMO. On the other hand, there are jump puzzles, typically to access a vista or a hidden explorable area, and those are fine to me, because they are optional and don’t gate progress on the storyline. I should peck away and try to advance along in short sessions.

The friends I had that played the game drifted away so I found myself soloing along and well, if that’s the case then GW2 is my 2nd or 3rd MMO priority so I play very little these days.

I’m curious what ArenaNet is also working on. It’s been 7 years since GW2 launched… I know the studio had some bad times, including a mass layoff last year (?). I hope they are on solid footing now and are also working on GW3. 🙂

One thought on “Guild Wars 2”