For a bit of variety I decided to check out crafting again. But a production craft, not a gathering craft like I tried previously. I was interested in alchemy or culinarian, so I figured – why not try both?

Thus I enrolled as a culinarian and an alchemist and found myself enjoying both of these more than the botanist. Part of it is these crafts makes things more obviously useful to me -potions, food. Another is I don’t have to hunt for materials, so far I can generally buy what I need from at the respective guild supply officers.

It’s a sign I’m enjoying a game when I get into crafting. I’ve tried it in almost every MMO I’ve played. Some systems are simple, basically gather stuff and craft (e.g. Guild Wars, where you really aren’t the crafter – you collect materials and an NPC uses them up to hand back the crafted item; so it is really just trading materials for items), some are a bit more complex (e.g. WoW or LoTRO, but both of these games have a “craft into the garbage” vibe, where nearly everything made that isn’t max level is generally useless, and progressing to max level in crafting means creating a heap of vendor trash.)

EVE has complicated crafting, almost repetitive-stress-injury inducing crafting. You had to hunt down available production lines, import materials to that particular station, obtain blueprints, etc. It was almost too much, given I didn’t want to produce items full time. Even planetary interaction lost its luster after a while; too much time spent fiddling with extractors and then hauling goods to market.

TSW crafting is interesting in that the crafting levels work differently – you don’t have to keep crafting the same thing to incrementally get better (e.g. LoTRO) until you unlock the next level. In TSW, you break down items to get components, then with the appropriate quality level tool kit and items, arrange those into patterns to make any weapon or jewelry. What is awesome is how some missions use crafting as necessary steps to solve puzzles (see Gravity, a fantastic quest). I’m pretty sure if you have the appropriate quality toolkit and materials, you can craft any item of any quality level at any time.

I haven’t really crafted much in ESO so I can’t comment.

And in Black Desert Online, let’s just say I just figured out how to tan hides and make beef jerky – that is I know nearly nothing. 😉 I read about all this complex crafting others are doing so the game is apparently deep in that respect.

Anyway, in FF14 I reached level 10 in both culinarian and alchemist, which lets me grab tradecraft levequests – and these reward a lot of experience! By doing a few of those I was able to hit level 12 in both crafts.

Crafting here involves gathering the ingredients and then using some trade-only skills. Every time you perform a step, the durability sinks and if it goes to zero the overall production fails. As you level, you get a few skills to bump quality chance, restore durability, give a better chance of error free steps, etc. There is something to do to create the product (besides clicking “craft it” and waiting out whatever delay the devs put in) which I suppose could be spun as a positive or negative – if you want to mass produce a bunch of items, this is bad (although if you are creating something you’ve made before there is an option offered to “mass synthesize”); but for attempting to make a few items as high quality as possible, this is good.

I do realize at level 12-ish I haven’t learned skills which might add even more to the crafting experience.

I probably won’t invest giant chunks of time into crafting, but I do like what I’ve seen so far and it’s another thing to do when I want a break from leveling a combat class. 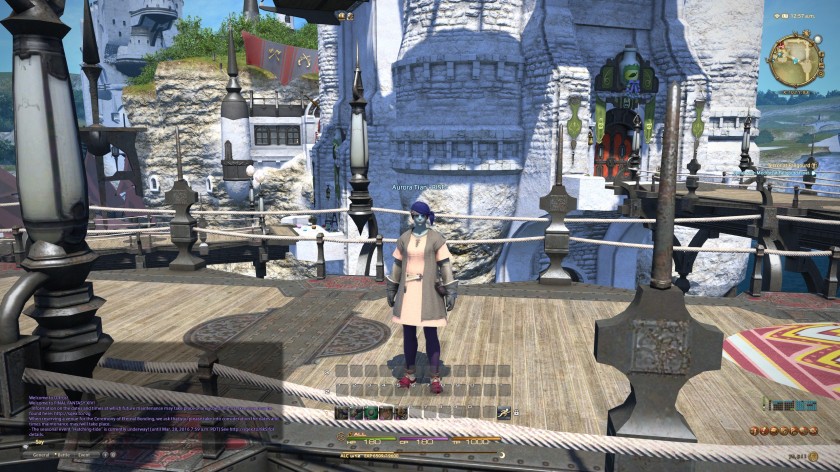 I find that it is handy to level 2 crafting classes together, because that lets me grab more of the crafting gear from class quests! I wanted the gloves and robe from the level 10 quest, so I took one from the alchemy class quest, and the other from the culinarian class quest.

The subtle appearance above shows my alchemy outfit, which is identical to my cooking outfit except for the class item and offhand. As a cook, the offhand is a knife but as an alchemist, it is an alembic right now.